Editor’s note: This story is the third installment of a four-part series looking back at the year that was — 2021.

During the months of July-September, San Marcos celebrated mermaid month, San Marcos CISD enacted a mask mandate amid a rise in COVID-19 cases spurred by the Delta variant and city government acknowledged it could’ve taken a different disciplinary approach after an off-duty SMPD officer was involved in a fatal crash.

State Rep. Erin Zwiener (D-Driftwood), who represents Hays and Blanco counties, joined Texas House Democrats’ effort to break quorum when the House of Representatives reconvenes for a special legislative session by leaving the state on July 12.

Texas Democrats announced they were leaving the state in an attempt to block Republican-led voting legislation from being passed during the current special-called legislative session. At least 51 of the 67 Democratic representatives — the number needed to break quorum — were in the process of leaving the state with a majority boarding a chartered flight from Austin-Bergstrom International Airport to Washington D.C.

In an effort to vaccinate employees, the San Marcos Consolidated ISD Board of Trustees approved a one-time $250 COVID-19 vaccination incentive during its July regular meeting.With trustee approval, every district employee vaccinated against COVID-19 received a one-time $250 stipend. District employees who are eligible to receive the vaccine but cannot do so because of health conditions or religious beliefs were also able to receive the stipend.

Pamela Watts continued to plead for justice and accountability for the death of Jennifer Miller, who died in a car crash caused when an off-duty San Marcos Police Department officer collided with her vehicle in June 2020.

Watts — Miller’s life partner — and a group of supporters met at San Marcos City Hall on July 21 hoping to provide City Manager Bert Lumbreras and Mayor Jane Hughson with a personalized calendar stocked with photos of Miller and an image of the crash that occurred.

But when she arrived inside City Hall, Watts was told neither were available.

In mid-July, the Old First Baptist Church of San Marcos — a significant part of the Dunbar Historic District and local landmark that was constructed in 1908 — recently received a $10,000 grant from the Fondren Fund for Texas of the National Trust for Historic Preservation.

The San Marcos City Council passed a motion to eliminate the city-implemented Utility Assistance Program during its Aug. 3 meeting. Along with discontinuing the assistance program, the council voted for all late fee balances over 30 days past due to be forgiven.

“It’s just mousy, let’s just end this, forgive the debt,” Councilmember Shane Scott said. “We went through a really bad time for people and they may never be able to pay this.”

The remaining funds from the assistance program, totaling $697,986.88 will be used to cover the balances of the late fees from San Marcos residents.

With cars whizzing by on Interstate 35, the Texas Department of Transportation broke ground on Aug. 4 on its upcoming I-35 at State Highway 123 project in San Marcos.

The I-35 at SH 123 project aims to improve the intersection between the two highways. It will include the reconstruction of the intersection and will also reverse entrance and exit ramps between State Highway 80 and RM 12. The project includes the reconstruction of the northbound and southbound I-35 frontage roads, including the northbound bridges over Willow Springs and the San Marcos River.

According to TxDOT, the project is expected to occur in phases until completed in early 2025, weather permitting.

The designation comes after the San Marcos Veteran Affairs Advisory Committee made a request to become a Purple Heart City by the Military Order of the Purple Heart. The Purple Heart Trail honors servicemen and women who receive the military decoration by creating a system of roads, highways, bridges and monuments that pay tribute to them.

The long-awaited grand opening of Sundance Record Lagoon — a beloved record store that closed in 2012  — was celebrated on Aug. 7 with a Second Line parade from Zelicks to the record store’s location at 241 N. LBJ Dr. A Second Line is a traditional jazz parade common in New Orleans funeral processions.

On Aug. 12, the San Marcos Consolidated ISD Board of Trustees approved a mask mandate for students and employees amid an increase in COVID-19 cases caused by the Delta variant. The board’s move went against an executive order issued by Gov. Greg Abbott meant to prevent school districts from issuing such measures. Days later, Hays County Judge Ruben Becerra enacted a mask mandate for all public K-12 schools throughout the county.

On Aug 20., Texas State University President Denise Trauth announced she will retire from her position after nearly 20 years.

On Aug. 24, SMCISD returned to in-person learning, while classes at Texas State began for the fall semester.

The Greater San Marcos Partnership announced Cooperative Laundry has selected San Marcos as the site of its next expansion in September, which included an initial $20 million capital investment. Cooperative Laundry’s facility will be located at 1225 Fortuna Road in the Whisper Development.

San Marcos celebrated all things mermaid on Sept. 1 with the official kickoff of Mermaid Month.

“It was proclaimed that the San Marcos mermaid is a symbol of strength and beauty — a guardian of the San Marcos River, a superhero to children and a symbol of friendship and unity, welcoming all to our great city,” Hughson said. “A connection to the past, present and future, our mermaid heritage runs deep, including the Aquamaids of Aquarena Springs, whose reputation was renowned all over the world. For many years, they greeted and entertained visitors from many countries.”

On Sept. 3., The City of San Marcos acknowledged that it could have taken a different disciplinary approach after an off-duty SMPD officer was involved in a fatal crash, following criticism for not taking disciplinary action.

San Marcos Police Department Sgt. Ryan Hartman, who was off-duty at the time of the collision, crashed into Watts and Miller’s car on June 10, 2020 in Lockhart. Hartman was placed on administrative leave following the fatal crash. Civil service departments have 180 days to take disciplinary action against an employee charged with misconduct related only to internal policy violations. According to the statement SMPD released, the department chose to tie its internal investigation to the outcome of the grand jury proceeding.

“The department has been criticized for not taking disciplinary action against Mr. Hartman before the grand jury rendered its decision. The department acknowledges that this could have happened had they taken a different approach, but not to the level of termination,” the City of San Marcos said in a statement. “Additionally, the very recent demands that Mr. Hartman be terminated now are opposed by the Texas Local Government Code which prohibits discipline action taken more than 180 days after the event.

“Moving forward Chief Standridge has clarified that, should future circumstances arise involving employees of the San Marcos Police Department, he is committed to immediately beginning concurrent internal investigations that will run parallel with criminal investigations as was the practice in his former agency.”

Texas State set a new freshman enrollment record in September for the second time in three years. The university announced that 6,600 freshmen were enrolled — a 13% increase from 2020. The previous record was set in 2019 with 5,855 freshmen enrolled at Texas State.

On Sept. 11, San Marcos remember the 20th anniversary of the 9/11 terror attacks. The San Marcos Fire Department hosted the inaugural 9/11 Stair Climb event in remembrance of the first responders that sacrificed their lives to save others during the attacks. 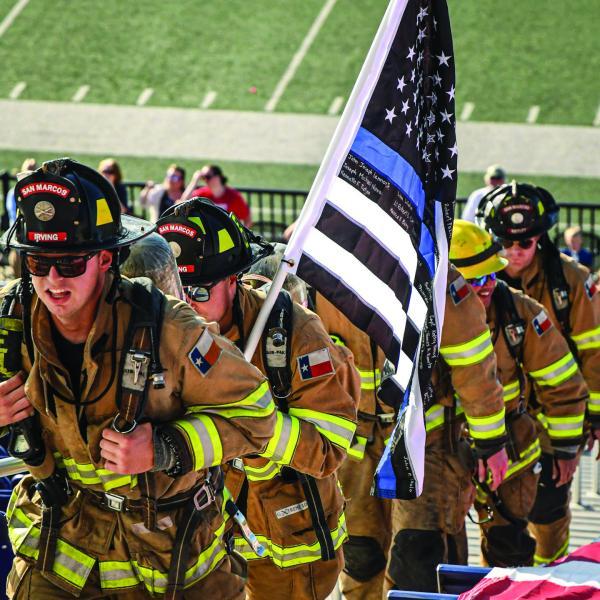 “My idea was to, you know, throw a stair climb and try to bring all the guys in this area closer together, and what better way to do it than honor our fallen brothers and sisters,” San Marcos firefighter Jacob Hanks said.

At the event, first responders climbed 110 flights of stairs at Rattler Stadium in full gear to represent the number of stair flights within the World Trade Center towers.

At City Hall, the City of San Marcos hosted its annual 9/11 ceremony, where members of the San Marcos Fire Department raised the same American flag that flew on that tragic day. The event also included the  “tolling of the bell,” a tradition in fire service honoring those killed in the line of duty, followed by a moment of silence. 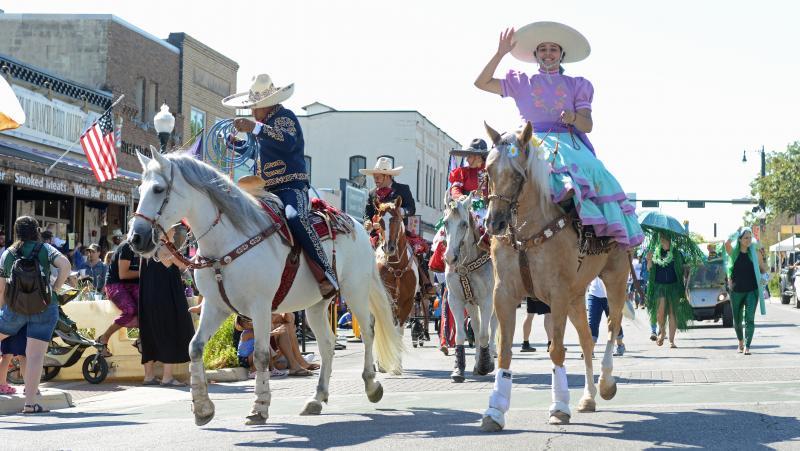