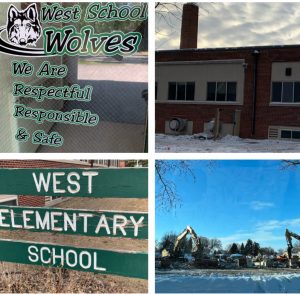 Americans, beset by product shortages, rising prices and the arrival of omicron, sharply cut their spending in December after a burst of spending in the fall that helped bolster the holiday season. Retail sales fell a seasonally adjusted 1.9% in December compared with the previous month when sales increased 0.3%.  Analysts expected spending to be unchanged.

Wells Fargo easily beat Wall Street expectations for the fourth quarter with interest rates beginning to take off, likely another boost for the nation’s largest mortgage lender going forward. The San Francisco bank posted earnings on Friday of $5.8 billion, or $1.38 per share, handily surpassing the $1.11 Wall Street was expecting. Wells took in $20.86 billion in sales in the quarter, also topping Wall Street projections.

The Grand Forks council is expected to give final approval this week to a replat and zoning of the former West School site on Tuesday night.  Developers plan to transform the shuttered school property on the city’s north side into eleven single family homes. A public hearing on January 18th.

Minnesota exports of agricultural, mining and manufactured products continued to grow, increasing by 19% to $5.7 billion in the third quarter of 2021, according to a report released by the Minnesota Department of Employment and Economic Development (DEED).   Many products showed robust growth trends between the third quarters of 2020 and 2021, including seven of the state’s top 10 products: machinery, electrical equipment, mineral fuels/oils, food by-products, meat, and aircraft/spacecraft.

The Grand Forks council gave preliminary approval last week to a Class 3 beer/wine license for the soon-to-open Famous Dave’s restaurant to be located at 1970 South Columbia Road.  The council paused on the renewal of an alcohol beverage license for The Ramada Inn on the city’s north side.  A requirement of the license holder is verification of property taxes.

Navient, a major student loan servicing company, has settled allegations of abusive lending practices for $1.85 billion. The settlement could cancel student loans for tens of thousands of borrowers. The deal includes $1.7 billion in debt cancellation and involves 39 state attorneys general.   Navient has also agreed to pay over $140 million in other penalties.

Railroads, rail shippers, cities and counties are encouraged to apply for up to $6.5 million in available grants for projects that will improve freight rail service that supports economic development.   The Minnesota Department of Transportation says the funding is available through the 2022 Minnesota Rail Service Improvement Program. Examples of projects eligible for MRSI funding include railroad tracks, roadbeds, turnouts, bridges, fixed loading/unloading equipment and buildings. Applications are due March 1.

Commercial Bee Supply has opened a new location in Hettinger.  The move is expected to create 12 full-time jobs and bolster the beekeeping and other agriculture sectors that serve a critical role in the community and region.  Governor Doug Burgum says as the No. 1 honey producer in the nation, North Dakota is a fitting hub for beekeeping supplies.

Minnesota Department of Agriculture (MDA) Assistant Commissioner Whitney Place has been appointed to serve as the Executive Director of the USDA’s Farm Service Agency (FSA) Minnesota office.  Place has been with the MDA since 2012, serving in multiple capacities.  In her new post she will oversee operations and agriculture policy implementation in Minnesota.

The federal government is moving forward with a plan to let teenagers drive big rigs from state to state in a test program. Currently, truckers who cross state lines must be at least 21 years old. But an apprenticeship program required by Congress to help ease supply chain backlogs would let 18-to-20-year-old truckers drive outside their home states.