Representation for New Braunfels residents in Congress will be split four ways under new maps approved during the third special session of the 87th Texas Legislature and signed into law by Gov. Greg Abbott following the results of the 2020 census.

Most of Comal County will remain in District 21 along with a narrower split of District 35 than the previous map. The Guadalupe County side of the city will be split between two districts both stretching to the U.S.-Mexico border. Where in the previous map that portion of town was only part of one district—District 15, according to the new map.

Two U.S. House of Representatives seats were added to Texas due to 16% population growth over the past decade, according to census data. Each district must land within plus or minus 10% of the ideal size of a district if each had an even distribution of the population, according to the legal requirements listed on the Texas redistricting website. U.S. Rep. Chip Roy, R-Austin, the current incumbent for District 21, will run for reelection in that district. However, District 35 will be represented by a new face as current incumbent U.S. Rep. Lloyd Doggett, D-Austin, is opting to run in a new district in Travis County—District 37.

The current District 15 Congress member, U.S. Rep. Vicente Gonzalez, D-McAllen, is opting to run in another border district as his home was drawn out of District 15 into District 34, currently represented by retiring U.S. Rep. Filemon Vela, D-Brownsville, and District 28 will again be part of New Braunfels. Incumbent District 28 U.S. Rep. Henry Cuellar, D-Laredo, previously represented a portion of New Braunfels prior to the redistricting that resulted from the 2010 census.

Changes at the state and congressional levels will be in effect for the primary elections slated for March 1.

With the city divided four ways and mostly new faces in its congressional delegation for residents to get to know, it will create an opportunity for developing new relationships, New Braunfels Mayor Rusty Brockman said.

On the Texas Legislature side, District 73 became an open seat, as current incumbent state Rep. Kyle Biedermann, R-Fredericksburg, no longer resides in the district and declined to run for reelection. District 73 covered Comal, Gillespie and Kendall counties on the previous map. Now that district covers all of Comal County and the western half of Hays County. House District 44 changed as well but not on the Guadalupe County side of New Braunfels. State Rep. John Kuempel, R-Seguin, filed for re-election in the district.

New Braunfels also saw changes at the State Board of Education level.

New Braunfels is currently represented by board member Rebecca Bell-Metereau, D-San Marcos, in District 5. The new map for the board draws New Braunfels out of that district into District 10. Where District 5 included New Braunfels in a district that encompassed Austin, San Antonio and much of the Hill Country, the new district wraps around Austin all the way to College Station in the east, according to the new map. 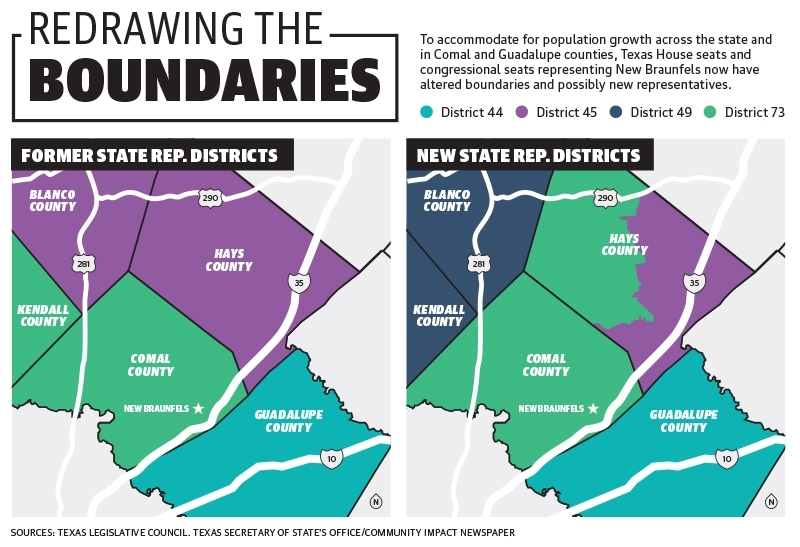 Jonathan Packer, president of the Greater New Braunfels Chamber of Commerce, said having new representatives will require some effort to develop new relationships.

“Our goal is to have active lines of communication regardless of who is in our delegation [and] to facilitate a productive working relationship with the business community in New Braunfels,” Packer said in a statement. “In this case we are going to have some relationship development to do, but that is OK. There are pluses and minuses to any configuration of representation.”

Jesse Crosson, professor of political science at Trinity University in San Antonio, said the redistricting changes in New Braunfels follow a similar pattern to the rest of Texas. That is, creating maps that have fewer politically competitive districts than in the past.

The 15th district, being vacated by Gonzalez, might be the only competitive district left. In the 2020 election, Gonzalez won with 50.2% of the vote according to the Texas Secretary of State’s Office. Projected changes show that district slightly favoring a generic Republican candidate, but it would remain a tossup.

“The other thing that’s worth noting is that Chip Roy’s district, which was previously Lamar Smith’s district … it wasn’t a toss-up but it was a lean anyway—it wasn’t a safe district. Now that’s a safe, safe district for Roy. So that’s the biggest high-level difference that I would say, both in the state level but you see it playing out pretty strongly both in San Antonio as well as in New Braunfels,” Crosson said.

Despite the new split in representation, Crosson said that it is worth noting that when a representative goes to Washington, D.C., they are not likely to ask for an address if a resident calls for constituent services to figure out if they directly represent them or not, because representatives think of themselves as serving the whole area anyway.

“Are you going to be treated differently by your representative directly? I don’t really think it’s going to have that much impact. There’s not really evidence to that effect,” he said.

Contesting the outcomes of the redistricting process

The process of creating the maps in the Texas Legislature brought resistance from various groups concerned the process would not result in an equitable reflection of where new population growth occurred in the state, said Miguel Rivera, voting rights coordinator for the Texas Civil Rights Project.

“So we know that in Texas over the past 10 years, the state’s population grew by 4 million people, and that 95% of that growth was from people of color. The maps at both the congressional level, the state Senate and even the state House level, don’t actively increase the districts that represent these new communities, but instead, actively increase majority Anglo districts in the map’s representation,” Rivera said.

Those allegations are in line with a U.S. Department of Justice lawsuit brought against the state of Texas on Dec. 6 alleging “vote dilution,” or spreading voters of color around several districts to reduce their voting power. If that could be proven in court, it would be a violation of Section 2 of the 1965 Voting Rights Act, according to the lawsuit.

“I think there was a tactic as a part of a larger strategy that we saw in gerrymandering from the state government this time around. I think the last time [in the last redistricting process] we definitely saw the cracking of urban centers. But I think this time around as urban centers grew by so much and basically grew too big [and were split] into several districts,” Rivera said. While the redistricting process could also be challenged on a partisan basis, Crosson said historically that is a losing argument.

“The Supreme Court has consistently said, ‘While we don’t love the partisan stuff, it’s probably constitutional. You know, it’s just politicians being politicians,’ and the Supreme Court generally just tries to stay out of situations like that,” Crosson said.

Voter turnout in presidential elections is always higher in “swing” states than “safe” states, Crosson said, and by that logic, if more congressional seats are considered safe, the less likely voters will show up.

“The bigger takeaway is we’ve got more safe districts especially [in] this region than we’ve had in a very long time.” Why would a voter turn out and participate if the perception is that the winner is a forgone conclusion?“In political science, we call it the case of vanishing marginals. There’s just fewer what we would call purple districts,” he said.